– The client and the server are running Windows 2000 or higher.
–  An Active Directory Domain with a primary domain controller (which automatically plays the role of the key distribution center) is available in the network.

In any other case, Windows will select NTLM as the authentication protocol described in the article How does NT LAN Manager Authentication work in ASP.NET.

The KDC (key distribution center), the core component of a Kerberos system, is responsible for issuing tickets and managing credentials. In the Windows world, an Active Directory primary domain controller plays the role of the KDC. Every client and all the servers, named actors, involved in the authentication process have to trust the KDC. It manages all the user and computer accounts and issues so-called authentication tickets and session tickets, where:

The big difference between Kerberos and NTLM is: while NTLM works for workgroup scenarios without a central authority, Kerberos requires a central authority for issuing any type of ticket. For that reason, if you want Kerberos to work, you need a connection to an Active Directory domain controller.

The next picture shows the flow for authenticating a user and then establishing a session between the client and the simple member server of a domain: 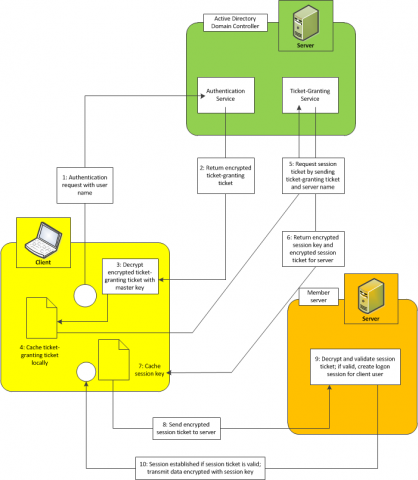 The basics about Kerberos authentication and tickets are described in the next steps:

Every ticket—session tickets and ticket-granting tickets—is equipped with capabilities which are a set of defined properties that are required for certain features, such as impersonation or delegation:

1. Equipped with the right set of properties (capabilities), tickets can be used for impersonating the client user on the server or delegating the client’s identity to another server.
2. If the client and the KDC do not include these capabilities into the ticket, features related to these capabilities would not work.
3. If the ticket does not include the necessary information for impersonating a user, impersonation will not work.
From the security perspective, this is a good design, as the client and the server can decide whether certain features are allowed or not just by including or not including certain properties in the ticket.

We use cookies to give you the best experience on our website.I accept